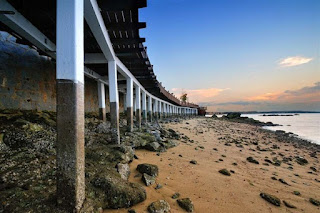 Changi Beach served as a popular killing ground for the Japanese during the Sook Ching massacre of The Second World War. Thousands of Chinese were tortured and killed during this Operation as they were suspected of being anti-Japanese. Strange crying and screaming are reported by people. The heads of the Chinese dead bodies are sometimes seen flying everywhere and headless bodies walk around the beach. The scariest thing is that the ghosts leave blood stains. During nights people observe dug holes that appear as if they were used for burying bodies.

Changi Beach Houses: These houses are for rent. Mostly families wanting a break by the sea will rent them. However, a few unluckly ones would return home with a scar. Most people reported a feeling of being stared at. Few unluckly ones were slapped by unknown forces while bathing. Few had heard scary noises at night like the crying of a lady. Witnesses said that the door of the old houses creaked while opening and closing without stopping. Some cases even involved sightings of ghosts, and more unfortunately, possessions. The mysteries remained unsolved til today.

Despite being such a tiny country, Singapore has reported more than its share of paranormal activity. Changi beach, in the east of the island nation, was used as a killing ground by the Japanese during the Sook Ching massacre of the Second World War, during which thousands of Chinese were tortured and murdered. Witnesses have reported mysterious crying and screaming and headless bodies walking along the beach. On top of this, the Old Changi Hospital and Changi Beach House are said to be two of the most haunted buildings in Asia. 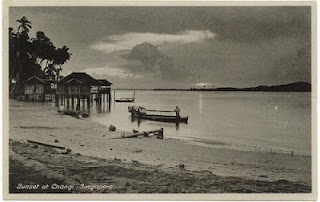 Changi is an estate that is located at the easternmost end of Singapore.  The estate has interesting landmarks including Changi Village, Changi Prison and Changi International Airport with Changi Point at the heart of the Changi area. Changi's name is derived from the Chengai, a tall tree (Blanocarpus heimii) that used to grow in the district. It serves as a popular beach and picnicking area for locals.

66 Chinese male civilians were killed by Japanese hojo kempei (auxiliary military police) firing squads at the water's edge at Changi Beach on 20 February, 1942. They were among tens of thousands who lost their lives during the Japanese Sook Ching operation to purge suspected anti-Japanese elements within Singapore's Chinese population between 18 February to 4 March 1942.

Tanah Merah Besar Beach, a few hundred metres south (now part of the Changi Airport runway), was one of the most heavily used killing grounds where well over a thousand Chinese men and youths lost their lives.